Första AP-fonden’s return for the first half of 2017 was 5.2 per cent after expenses

Första AP-fonden’s (AP1’s) net investment income for the first half of 2017 amounted to SEK 16.1 billion (10.6) after expenses. This equals a return of 5.2 per cent (3.5). Total net assets amounted to SEK 323 billion at the end of the six-month period. The real return for the past ten-year period was 4.3 per cent annually after expenses. AP1’s target has therefore been exceeded in both the short and long term.

“We are pleased to report a return on assets under management of 5.2 per cent after expenses for the first six months of the year. During the period we added SEK 3.7 billion to the Swedish Pensions Agency.”

Since the income pension system’s net flows became negative in 2009, AP1 has paid out SEK 40.2 billion in total to cover the deficit in pension disbursements. The Fund’s total net investment income during the same period, i.e. 2001 – 30 June 2017, amounted to SEK 208 billion.

“Naturally we are delighted to have helped strengthen the Swedish pension system for so many years, but the outlook for being able to continuing delivering a high real return is more demanding. The market conditions with long-term low interest rates are the primary factor that has increased returns and asset prices in such a way that it is realistic to expect a period of lower returns than normal for most classes of assets.”

The Swedish government recently presented its proposal for revised investment rules for the AP Funds.

“We are one of the referral bodies. We will be familiarising ourselves with the details of the proposal and making a comment at a later date. Generally speaking, however, we welcome the proposal as it brings our current investment rules up to date. More modern, flexible rules can provide us with a better foundation to achieve our return target in the long term, and thereby continue to play a vital role in the pension system.”

AP1’s administrative expenses remain low by international standards and are on a par with last year (0.15 per cent).

– Measured over the latest ten-year period, the average real annual return amounted to 4.3 per cent (4.8), exceeding the long-term target of a real return after expenses of 4.0 per cent over rolling ten-year periods.

– AP1’s management generated during the first six months 2017 an excess return above the Fund’s strategic benchmark* of 1.2 percentage points, which equates to SEK 3.6 billion.

– During the first half-year AP1 was particularly active in the area of real estate, for example, with a range of direct investments: increased holding of retail properties in Secore Fastigheter, continued expansion in real estate company Willhem and a new joint venture with Elo with a focus on Finnish commercial properties. 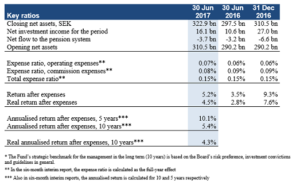