Första AP-fonden’s return for the first half of 2018

“The global economy continued to develop strongly during the first six months of the year, although the growth rate may have peaked. AP1 has delivered a positive net investment income of SEK 8.5 billion after expenses, which equals a return of 2.5 per cent. Our expenses decreased during the first half year and at 0.13 per cent (0.15) of average assets under management, our expenses remain low both in absolute terms and by international comparison.

Since 2009 AP1 has disbursed SEK 47 billion, of which SEK 3.3 billion in the first six months of 2018, to cover the contribution deficit in the income pension system.

“Together with the other AP Funds we have delivered historically strong results over the years and have thereby helped the system for income pension remain strong. The Funds represent approximately 15 per cent of the pension system’s assets, compared to 10 per cent when the pension system began in 2001. The challenge for us over the next ten years will be to deliver a return close to the high levels of recent years.”

“During the first six months of the year we have taken small steps towards a more defensive portfolio focus. There have not been any major movements, but these steps indicate that we believe we are in a late stage of the economic cycle and there is an increased risk of weaker development.”

AP1 is making conscious efforts to develop sustainable value creation by integrating sustainability aspects for the entire portfolio. This work will be further intensified the coming years in co-operation with the other AP Funds.

“During the spring we drew up special internal sustainability beliefs to create further clarity regarding how these issues are handled. A strategy is currently being developed for implementation, including measurement and reporting, in line with Agenda 2030 and the UN’s Sustainable Development Goals. 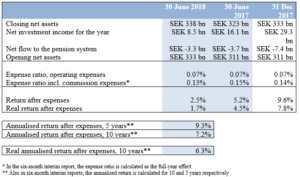 The Half year results press release